So today we’ve got Charles from Legislate – introduce yourself, the beginnings of your career, what you’re building now, and where you’re planning to go with it.

I’m Charles Brecque, founder and CEO of Legislate. I studied engineering at university, then joined a tech startup, and quickly moved into business development. And I realised during my business development efforts that often, selling wasn’t necessarily the issue, but contracts were. We always had to deal with lawyers, whether it was our own lawyers or client’s lawyers, and it could take far too long for them to actually provide input on our agreements because  they had much more pressing things to focus on.

So it just meant that the agreements would be delayed and the commercial relationships would eventually fizzle out. And in two occasions we had contracts which were negotiated, ready to be signed, but weren’t signed simply because the agreements were taking too long and it was no longer a business priority. 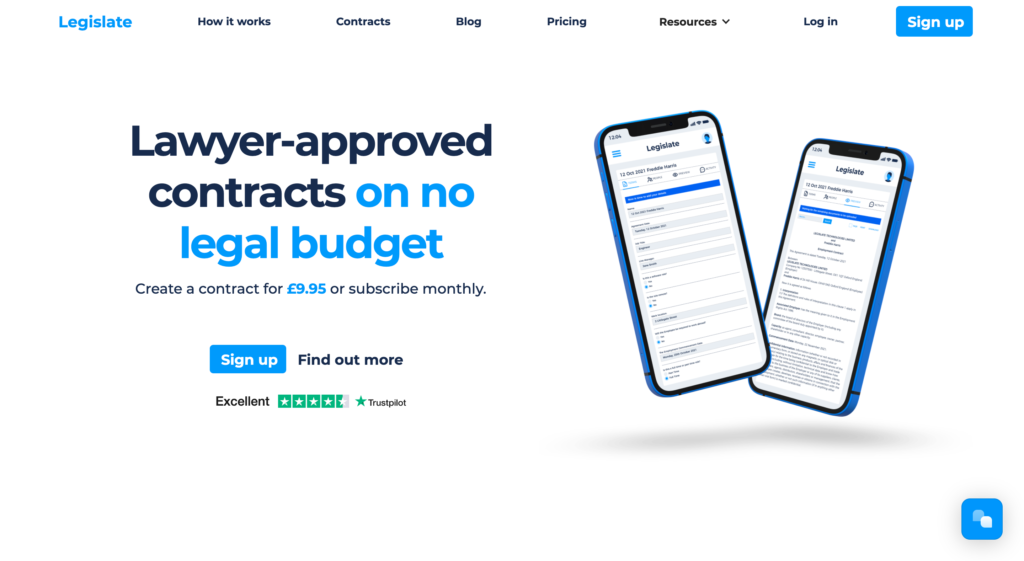 What I wanted to do with Legislate was create a platform to empower non-lawyers like myself, to create lawyer approved agreements without needing lawyers to get involved. So that’s the first problem we solve.

The second problem that we’re solving is once you’ve signed your contract, tracking that contract post-signature is often a nightmare. If you’re well-organised, you might store contracts in a drive, but even then, it’s really difficult to answer simple questions about your contracts. For example, “which contracts are expiring in the next three months?”, or “which contracts have a value greater than 10,000 pounds?”.

These are questions which are really difficult to answer, unless you’ve been really careful with how you store contracts. So ultimately with Legislate, we’re solving this problem and making contracts easy to create in a safe way, because obviously there are lots of platforms that offer templates, but they’re not necessarily super safe or easy to tailor to your requirements unless you’re a lawyer.

That’s brilliant. It’s definitely something needed for those that deal with legal contracts but don’t always have the resources to create and manage them.

And from a founder perspective, what’s been the highlight so far?

I think the highlight, now that we’re in our second year of building Legislate, is seeing a lot of the results of all last year’s hard work come into play.

So things like people finding us and signing up, becoming customers, people using features and providing good feedback on features that have been tried and tested and iterated on. And also I think just seeing the team grow together has been great.

You talk about the work you put in last year, can you describe the stages you’ve been through in terms of building then launching?

Yeah, I mean, last year wee already had somewhat of a product, but it was about taking it to the next level. I also think we started putting out content, and content takes time to get crawled by search engines. And we ended up putting out over 180 blog articles last year. That has turned out to be a great go to market for us, in terms of acquiring new users.

So I think for this year, obviously we’ve been doubling down on what worked last year. But I think it’s also difficult to know if something is working until you reach a certain level of momentum. And so I would say last year we were seeing early signs of momentum and positive feedback from the market, but it’s really been in the past couple of months that things have started to go in the right direction and validate all our work so far.

Right – and what’s been the biggest curve ball so far? Something you didn’t expect?

I think it’s really our target market. I always kind of imagined non-lawyers using the product, but I didn’t necessarily imagine which particular target market would use Legislate. I came from a startup background so I just assumed we would target small businesses and startups, but very early on, we were lucky enough to, come across some landlords that wanted a system like Legislate to create tenancy agreements without having to meet their tenants, because it was, right in the middle of COVID. And, so we thought, why not?

It was a great opportunity for us to learn. They’re ready and keen to use it today and their requirements are relatively easy to address. So now the property sector accounts for 50% of our customers and that’s something which I didn’t account for when we started.

Brilliant. And In terms of you personally as a founder, how have you stayed focused and productive all the way through, beginning with the idea to where it is now?

I think as a founder it’s very important to stay focused. The key thing is to go one step at a time, because if you do start to try to go two or three steps ahead without having done the work, then that’s when you can end up in situations where you are down a rabbit hole or you’ve got multiple threads which are open.

And I think that’s where you can either get overwhelmed, or waste resources, and end up, not actually having anything concrete as a result of that. So, I say that’s the key.

100%. When you think about resources and managing your tasks, what do you give out to people and what do you do personally?

So I think as a founder it is very tempting to value your time and say my time is valuable therefore, I shouldn’t be doing X, and I should be delegating this to a certain person. But in reality, as a startup your resources are limited and you can’t necessarily afford to hire someone. You can obviously use a Paperound Tasker to help you get more done cost effectively but I think before you start doing any form of delegation as a founder, you’d need to have done the job at least once.

And if you delegate too soon without having done that homework or that prep, then, it can be much more costly or ineffective than if you’d done the work yourself. Because the person you’re bringing on might not have the same vision as you. And if you can just do that groundwork, it’ll make the onboarding so much better, regardless of whether you bring on someone full-time or part-time.

At Legislate I’ve learned both the hard way, but also by doing a lot of things myself that I should just do everything myself first and then build those playbooks for whoever’s going to do the job next.

As you know, we speak to founders, but we also speak to a lot of students as well. It’d be good to hear about your first job or first experience coming into the world of work and what you learned from it.

Yeah, so my first ever work experience was, being a factory worker in a car factory, in Moscow.

Wow, that’s not the usual answer.

Yeah I know. In my engineering school, they would always make first year engineers do Factory worker type experience – physical and manual experience. And I chose Moscow because, in Russia at least, they’ve got a very specific factory work culture, which I wanted to gain exposure to.

And, the factory was so big that if you needed to get to the toilet you would need to run, because if you weren’t back in time, the conveyor belt would just start again and you’d have to catch up somehow.

I think it was a great experience though. It taught me a lot about hard work and physical work. It really opened my eyes up about factory work, and I was really impressed with the resilience of the other factory workers who were full-time, they were motivated and they were doing a much better job than me.

I think everyone should do at least that type of experience, not necessarily factory work, but at least some manual work, just to appreciate how difficult it is.

And also so that if you’re ever fortunate enough to end up in a position where you’re managing a factory or you’re leading an industrial organisation or leading a company where there is frontline work, then at least you have an appreciation of what it is.

100%. And lastly, obviously you’re an entrepreneur now with a growing tech business. What would you say to your student aged self about founder life and building those first blocks of a career?

I would maybe say be patient. I was very impatient in my previous role, I wanted to become an entrepreneur and I think had I stayed a little bit longer, maybe I would have missed my opportunity for Legislate but maybe I would have built more of a network that I could rely on afterwards. But that’s easier said than done because I was very impatient but I think I was definitely fortunate enough to take that big jump, and definitely got lucky as it could have gone horribly wrong.

But I think, apart from obviously gaining exposure to tech or any other startup experience for your studies, I’d definitely recommend being patient and trying to learn as much as possible from people who have been there and done it before.

And I guess the other piece of advice is, not everyone should work in startups. I think if you can work out early on whether you are a startup person or not, that can help you in your career.

Thank you so much for your time Charles

Head here to check out Legislate and start creating contracts.