Founder Chats: Make Impact – B Corps, focusing your impact, and the role of innovation

Today on Founder chats, we’ve got Fiona from Make Impact. Tell us about what you do Fiona!

So Make Impact is an agency empowering companies to make their business a force for good. I work with SMEs from across industries, mostly founders, to support them to go through the B-Corp certification process, and help them develop a clear social, environmental purpose, design a strategy and plan to implement it. 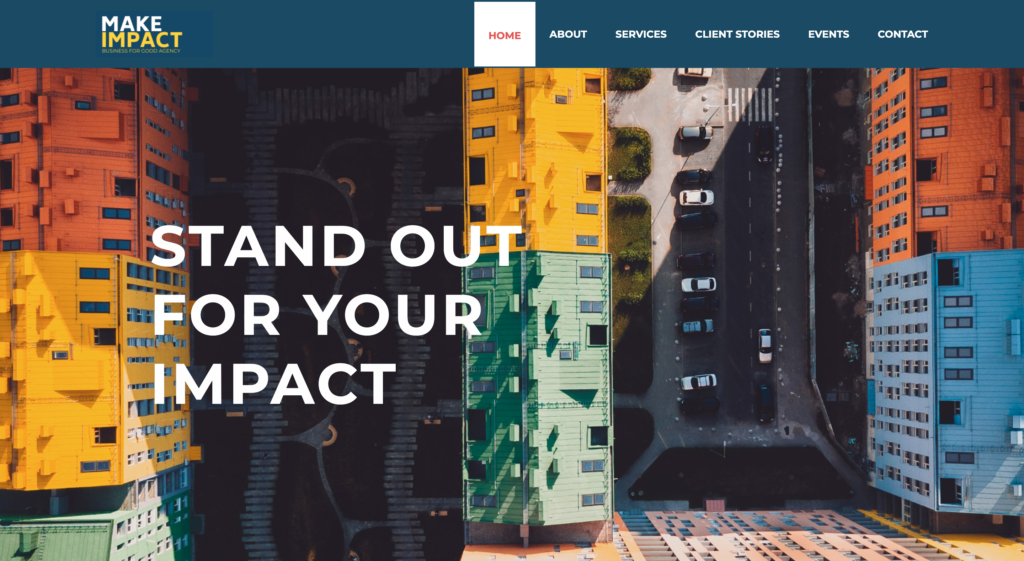 B Corps seem to be becoming much more known and people are getting more educated on the B Corp certification. How would you describe what being a B Corp is and why people are going for it?

So B Corp is a certification. And it’s the only certification that verifies a company’s positive impact across the whole of their organization. It is a way to understand, prove and improve the positive impact you have through your governance, on your workers, the community, the environment and your customers.

But it is more than just a certification. It’s also a community and a movement. So in becoming a B Corp, you basically believe in creating a global economy that uses business as a force for good in the world. There’s opportunities to get involved in the community more broadly, and collaborate to raise the profile of this kind of work, get involved in campaigns and really drive that overall belief.

And it’s taking off?

I think it’s really captured people’s imagination and its growing in the UK really fast at the moment. So just over a year ago we had only 400 B Corps in the UK. We’ve now got 700 – that’s expected to be a thousand by August and one and a half thousand by the end of the year. That’s just in the UK.

Globally, there’s around 5,000 B Corps. I think it’s really captured people’s imagination because I think a lot of people believe in companies doing the right thing, but there’s not necessarily been a way to understand their impact and prove that across an organization.

Yeah, completely. There’s increasingly more founders i speak to that want to not only start companies that achieve huge amounts of scale and obviously get an impressive return, but take some kind of responsible role in society.

We’ve seen impact focused organizations have been around for an eternity. Whether that’s in the form of social enterprises and community projects and things like that. Why do you think the narrative on impact as a sector has become more mainstream in recent years?

I think there’s lots of reasons. I think partly it’s awareness and visibility that’s been created by digital communication. So people can actually find out a lot more about what’s happening. I think, there’s a lot around the rise of capitalism and it’s effects, and people understanding that a lot of social and environmental issues have been caused by business activity. And there’s a frustration around that.

I guess public sentiment has really driven that change in a big way. The Edelman Brand Trust survey stated that 80% of people want brands to solve society’s problems. That’s a huge percentage when you look at it, let alone people being inspired themselves to think about: “well, how can my business profitably solve some of these social environmental challenges?” There’s a huge opportunity there.

That’s interesting. My background is in economics, and I think about incentives all the time, and what’s the incentive for companies to do that. But I guess more recently, the motivation is just coming out of people spotting these problems and wanting to solve them, rather than these people having to be incentivized to do that. Or do you think problem solvers do need to be incentivised in this area?

I mean, I think it helps. Just doing good in a vacuum, can cost a lot of time and money and actually can be detrimental to the business. If we’re going to create real change, we need to see companies that do good, grow, outperform their competitors and challenge their industries. So I think it’s really important for them to be thinking strategically about the benefits that can be built in so they can do that. Things like attracting and retaining talent. You just have to look at the great resignation to see that people want specific things out of their work.

They don’t want to be working just for the money, but part of a good culture and feel like what they’re doing is really making a difference.

And a lot of consumers are voting with their wallets now – there’s huge markets to tap into, particularly with Gen Z.  And with investors we are also seeing this – so there’s now more money being invested in ESG funds (environmental, social, and government funds) than regular funds.

So there’s lots of opportunities and scope for innovation in this space. The bar being is being raised all the time, and I genuinely believe that if companies don’t get out in front of it, they’re going to suffer financially.

Totally. And when you think about that innovation angle, traditionally we’ve seen a lot of impact motivated organisations doing important work at a local level, but aren’t necessarily described as innovative and scalable. Do you think those two areas of scalable solutions and impact are coming together more? And what do you think the implications of that are?

I think it’s really exciting and I think that’s where things are going. It’s really tough to get that balance between purpose and profit and, and I think that’s where a lot of community and social enterprise initiatives have struggled in the past. But we can see good examples of it being done. You just have to look at Tesla. I think they are a really interesting example of taking a massive environmental issue and, making a sustainable option really compelling. They’ve really figured out “how do you make that attractive to the consumer?”

They’ve done an amazing job of accelerating the transition towards electric vehicles, and doing it in a way that makes financial sense too. And I think that people seeing examples like that is inspiring; when you can align that purpose, and consumer problem and start to take on social and environmental challenges, that’s great. And, it’s forcing other people to innovate. So I think that’s the route to change, and that’s what really excites me.

Brilliant. And from your own experience with the work that you do with Make Impact, who are some of your favourite impact businesses or business models that you’ve interacted with in the UK?

I think one of the misconceptions around some of this is that your purpose or the positive social, or environmental impact that you’re making, can be quite separate to the overall business. Whereas the best examples, if you can build it in, is where business leaders start to address the direct negative impacts of their industry, and what’s the potential for positive impact.

One of the businesses I like is Wholegrain Digital – they’re a web design agency but they’ve identified the problem of high carbon footprint of websites… I can’t remember the exact latest figures, but it’s something like: “if the internet were a country, it would be the 7th largest polluter in the world”. That’s down to the amount of processing power, energy it uses.

A lot of us just aren’t aware of that. So they took this problem, accepted they are partly responsible for this, and made it their purpose to address it. They started looking at ways that they could reduce carbon footprint in the design of their websites.

And they’ve done it in a way that not only reduces carbon footprint, but increases speed, and user experience. So they sell low carbon websites but they also do other work to raise awareness and help others to address the issue. They created a carbon calculator, which is a free to use online tool. You can type in any website and it tells you how much carbon it’s creating and ways to reduce it. They’ve also created a sustainable web manifesto, written a book and do talks, write blogs and more all of which not only create a positive environmental impact but also helps raise their profile and supports their business growth.

I think that that’s a really interesting approach that has multiple benefits throughout. From a tech perspective, it’s quite an interesting one as there’s not a lot of awareness around that issue, but the way that they’ve made that work as a profitable model and integrated it throughout is really interesting.

It would be good to hear your views on how we go about measuring the impact we have. We’ve got incredibly formalized structures around finance, for example EBITDA, net profit, gross profit, gross revenue all that kind of stuff. And across economics too we’ve all agreed on metrics such as: economic productivity, GDP per capita…These are very formalised metrics. How do you think we start applying metrics to impact areas?

So I think there’s a few different ways to look at it. Firstly what you want to measure and why. And think about how you are going to use those metrics to make your business better. B Corp provides a really interesting way to measure your impact, across the board. When completing the impact assessment overall, you need to score a minimum of 80 points. It is a good indicator of being a positively impactful company. It is easy to compare scores against others and provides a framework to drive improvement.

Looking deeper into some of the assessment, you’ve got things like; thinking about how much energy you use, how much water you’re using, on the environmental front, you know? And the targets you are setting to reduce those. Other areas make you think about your supply chain, how you treat your workers, and about employee engagement and satisfaction. There’s all kinds of different measures, that feed into the score that can be compared and made transparent.

And I think for a purpose led organization, there’s interesting metrics that can be looked at around, “what’s the actual underlying problem that you’re trying to solve”, and how can you measure if you are achieving it.

A good example of this is Ella’s kitchen, the children’s food brand. The problem they’re looking at is: one in five children are overweight or obese by the time they reach school, it’s a really clear problem.

So everything that they do is trying to improve children’s lives to develop healthier relationships with food. And they make sure to measure their achievement of that through various different metrics that operationally feed in to other commercial metrics that make up their company progress.

So there is different ways to look at it, but I think there’s no one set way for an organization overall, and, and you’ve got to have a look at it from a perspective of; what makes most sense to you. I think it’s really important to have that clarity and think about: What is the specific problem you’re trying to solve? And what’s the overall impact you’re trying to make?

Brilliant. Thank you so much for giving us your time today. If anyone wants to learn more about Fiona’s work with Make Impact, head to makeimpact.co.uk.